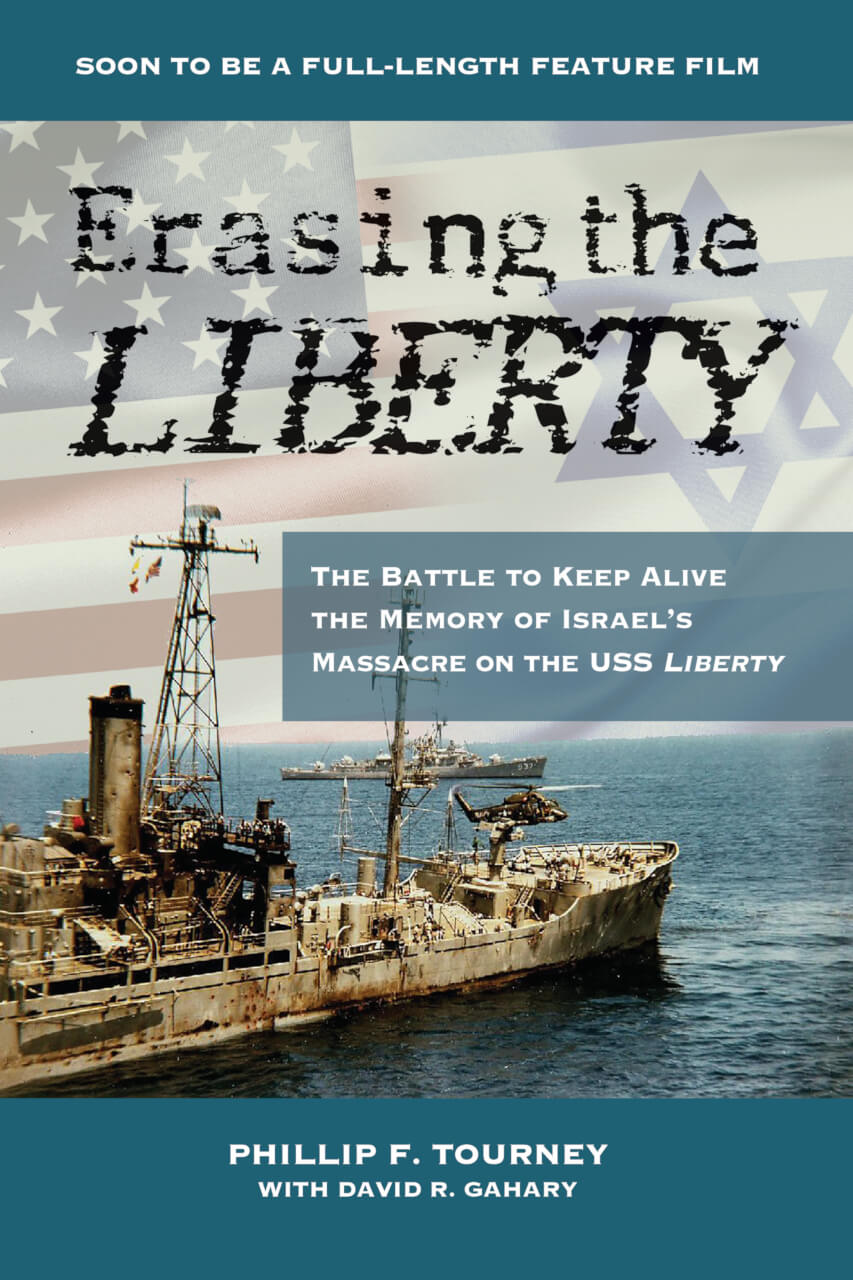 Add Holocaust on the High Seas and orders shipped to non-U.S. addresses pay no extra shipping.

On June 8, 1967, the virtually unarmed USS Liberty (AGTR-5), the U.S. Navy’s most sophisticated spy ship, while monitoring communications in international waters in the eastern Mediterranean during the Six-Day War—to find out if the Soviet Union was assisting its Arab client states—was viciously attacked by unmarked Israeli jets and marked Israeli motor torpedo boats.

The unprovoked, premeditated assault murdered 34 young American boys and wounded 174, out of a crew of 294, an almost 71% casualty rate. The ship took nearly 1,000 cannon and rocket holes—some the size of basketballs—as well as over 5,000 armor-piercing shells, through the skin of the vessel. The Israelis dropped napalm on the defenseless ship and shot at sailors attempting to rescue the wounded and put out fires, as well as firing on all the remaining life rafts, a war crime.

Caught in the act after a Liberty SOS was picked up by the USS Saratoga (CV-60) hundreds of miles away conducting drills with other vessels of the Sixth Fleet, Israel claimed the massacre was an “accident,” a case of “mistaken identity,” a lie none of the survivors could ever believe.

The truth is the Saratoga broadcast a message “in the clear” after they scrambled 12 F-4 fighter bombers to come to the aid of Liberty. Sadly, help never arrived, as these jets and another sortie were recalled by none other than the President of the United States, who initiated a cover-up that lasts to this day.

Find out the whole story of this national disgrace in the pages of Erasing the Liberty: The Battle to Keep Alive the Memory of Israel’s Massacre on the USS Liberty.

“Phil Tourney and Dave Gahary have captured the horror and devastation experienced by those of us who were aboard the USS Liberty on June 8, 1967. The firsthand accounts of the Israeli attack on a lightly armed U.S. intelligence gathering ship are both troubling and moving. They clearly express the organized chaos of the men who lived through this attack, an attack unique in U.S. naval history. It is clear, with documented overflights by Israel Defense Forces (IDF) reconnaissance aircraft prior to the attack, the use of unmarked IDF jets, the accuracy of IDF pilots who hit all strategic shipboard targets, and a cover story that makes no sense at all, that this was a well planned and executed Israeli attempt to remove real-time witnesses before they annexed the Palestinian lands taken as the Six-Day War wound down. Seeing the attack through the eyes of the USS Liberty crew gives the reader a sense of being there. A good read and an important historical document that exposes a new insight into previously rewritten U.S. history.”

BODY LENGTH: Lay garment flat (face down). Measure from center back neckline seam straight down to bottom of the front hem.

BODY WIDTH: Lay garment flat. 1" below the armhole flat measure the garment across the chest.

SLEEVE LENGTH: Lay garment flat (face down). Measure from center back neck to outer edge of shoulder seam, then along outer edge to sleeve end.